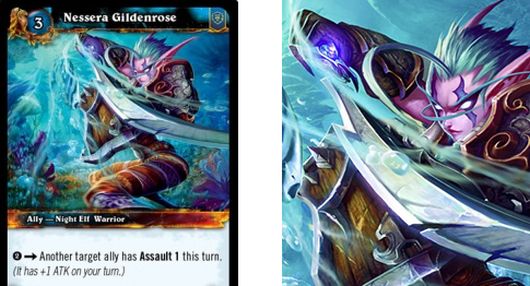 Tweeria is a web-based role-playing game that advertises itself as the “laziest MMORPG ever.” It uses Twitter to passively power and level up a virtual character set in a fantasy-based world, and has now been accused of stealing art from the World of Warcraft collectible card game.

Mike Sacco, a representative of WoW CCG owner Cryptozoic Entertainment and columnist for WoW Insider, points out that artwork uploaded by the Tweeria staff for the title is ripped right off from the cards.

Tweeria’s creator, a Russian company called Twee Game, claims it’s a “mostly experimental” project, and the game has since added a “copyright notice” at the bottom of its pages to try and attribute the artwork to its creators. For now, the game is still up and running, despite user feedback saying that it’s unclear just how it all works anyway.