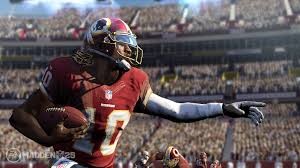 One of the most popular video game series of all time, John Madden football, dropped its 25th anniversary game a couple months back. The highlighted feature of Madden 25 is its revamped “Run Free” running controls. Hall-of-Fame running back Barry Sanders gives his stamp of approval as the cover guy (for the second time) and in Madden 25 you can move like Barry, with all new precision modifier ball-carrier mechanics. It’s a mouthful to say and a handful to get the hang of, but it just takes a little intuition and some getting used to, like most other features introduced throughout Madden’s decorated history.

In the past, there have been eight moves you could make while carrying the ball; stiff arm, juke to either side, spin move to either side, hurdle, the stop-on-a-dime step back and the bull move (basically just plowing your opponent over). Now, there are more than 30 possible moves.

Based on the evolving nature of the new school of dual-threat quarterbacks like Colin Kaepernick, Cam Newton and Robert Griffin III, the new running controls are designed to give the virtual versions of these breathtaking athletes some brand new moves and unique combinations that you’re unlikely to see repeated the next time you pick up the sticks.

And for those out there that live and die by the “defense wins championships” notion, know that features like “Heat-Seeker Tackling” and the defensive recovery mechanics allow more precision with tacklers and give defenders the opportunity to get back into plays after having their tackle broken. You can even leap over blockers to make highlight reel stops.

As athletes in the NFL get bigger, stronger, faster and more unstoppable so does Madden. The game boasts a plethora of new realistic features that are sure to stick around as the series moves forward. Just make sure you don’t get frustrated and give up on learning the new mechanics too fast. Because like the new quarterback class and the Madden franchise itself, it’s all about evolving.